FREEDOM - A documentary about ethanol, biodiesel & biofuels by Josh Tickell 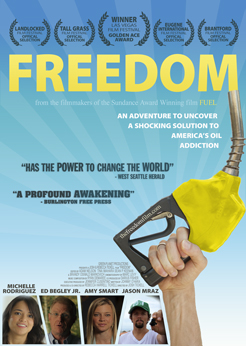 The documentary FREEDOM from husband and wife team of Josh and Rebecca Tickell is aptly named because in the context of the film it represents the most significant meaning of the word and gives it depth, dimension and hope. The couple showed the rough cut of the film, it’s only Seattle theatrical showing at the Admiral Theater (the third time it’s been shown publicly) on Saturday, Aug. 6. It’s due to be released at the same time theatrically and on DVD later this month.

FREEDOM is about a journey the couple took that began with a wish to document the disaster of the Deepwater Horizon oil platform and its impacts on the Gulf Coast environment, economy and people. They actually shot that film (which documents among other things Rebecca’s ongoing health impacts) and also what the film makers say was, “an incredible coverup,” and it will come out in the future. But along the way Josh came to a new understanding about the world’s relationship, and this nation’s addiction to oil.

He produced a multi award winning film in 2008 called “Fuel” and had been championing the use of bio fuels for a decade. He met his wife Rebecca during the making of that film. In that film he came out against what is the most widely available alternative fuel, ethanol, because the information that was available about it was largely negative. Josh and Rebecca were witness to the efforts to attack all alternatives to petroleum. “We watched the biofuels movement collapse,” said Rebecca.

In a story arc worthy of Hollywood the Tickells did a complete 180 and learned that nearly everything they had been told about ethanol was false. Further, they came to see it as the most pragmatlc solution to a series of problems facing the United States. These are not starry eyed liberals with unrealistic dreams. They understand that ethanol has drawbacks too. But to get the truth out about it and what it could mean to the American economy, and our way of life, they recognized they had to make a film.

“There are no words to describe the life of an eco-documentary activist filmmaker. The last time we showed a film here (Fuel) we were greeted with protest signs,” Rebecca said. “We’re tackling a pretty unpopular topic in bio fuels and ethanol is kind of a dirty word and corn is definitely a dirty word for most people.”

In order to uncover the truth, they had to challenge dozens of assumptions about ethanol, corn, and the avowed beliefs of experts (some paid by the petroleum companies) and traveled across the country to conduct the interviews that comprise some of the most telling moments in the film. Much of what has gained credence as accepted fact was, as they show in the film, based on an orchestrated campaign to discredit ethanol. The film decimates those arguments in a series of interviews, graphics and explanations. In the end, they conclude that ethanol produced by corn, biomass, waste and even garbage has the potential to help this nation lift itself out of the recession and restore the very source of our freedom, our own self reliance.

America’s dependence on foreign oil has consequences everyone understands from the need to provide security (and fight wars) over another nation’s natural resources to being held economic hostage by those who control the supply.

FREEDOM makes a completely compelling case that by converting our dependence on oil to a literally home grown source of energy we achieve several goals. First we improve our economy by spending energy dollars here, second we create more jobs, third we base our energy needs on a renewable resource (corn and biomass), fourth we reduce our impact on the environment.

Ethanol does not require more energy to make than it yields.

Argonne National Laboratory research has shown that corn ethanol delivers a positive energy balance of 8.8 megajoules per liter. The energy balance from second-generation biofuels using cellulosic sources is up to six times better, according to a study published in Biomass and Bioenergy Journal.

Ethanol does not take food away from humans.

Only 1 percent of all corn grown in this country is eaten by humans. The rest is No. 2 yellow field corn, which is indigestible to humans and used in animal feed, food supplements and ethanol.

Ethanol does not emit more greenhouse gases than gasoline.

A 1996 EPA study analyzing sources of air pollution confirmed that gasoline vehicles and non-road equipment are the largest contributors to vehicular gaseous hazardous air pollutants. However, another study showed ethanol reduces tailpipe carbon monoxide as much as 30 percent and tailpipe particulate matter emissions by 50 percent. Also, the Journal of Industrial Ecology at Yale University published a study in 2009 that found that greenhouse gas emissions are reduced by up to 38-59% when using ethanol as a transportation fuel.

Ethanol can be made from waste.

Cellulosic ethanol can be made from agricultural waste and biomass such as corn cobs and stover, wheat straw, wood, energy crops & even municipal waste.

12 billion gallons of ethanol were produced in Canada and the US in 2010.

This will grow to 36 billon gallons by 2020. Currently, the ethanol industry replaces 364 million barrels of imported oil each and every year in the USA and Canada.

There are 8 million flex fuel vehicles already on the road, which is 3% of US vehicles.

We’re adding 800,000 to 1 million new flex fuel vehicles each year. There are already over 2,200 E85 and ethanol blender stations with over 60 E85/blender stations per month being installed.

Ethanol creates jobs and is good for the economy.

A major study by the Windmill Group identifies 645,000 jobs created by ethanol in the USA.

To promote the film the couple are now on a three month, 30+ city North American Clean Energy Tour in a fully customized Freedom Bus, a “green” constructed, highly energy efficient vehicle that will park at movie theatres playing the film.  The Freedom Bus will be open to the public for free and will showcase the latest biofuel-efficient, advance fuels and wind, solar and water technology.

A bit more work needs to be done on the film including some editing refinements, and the addition of a section on hemp as an energy source. The film will premier in Los Angeles August 14.

You can learn more about the film on the website www.thefreedomfilm.com.

GET YOUR OFFICIAL DVD ~ “FREEDOM” BY JOSH & REBECCA TICKELL BY CLICKING HERE »> GO!