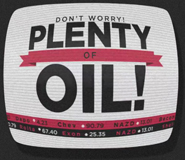 In recent months we’ve seen a spate of articles, reports, and op-eds claiming that peak oil is a worry of the past thanks to so-called “new technologies” that can tap massive amounts of previously inaccessible stores of “unconventional” oil. “Don’t worry, drive on,” we’re told.

WE NEED YOUR HELP SHARING THIS VIDEO

We can fall for the oil industry hype and keep ourselves chained to a resource that’s depleting and comes with ever increasing economic and environmental costs, or we can recognize that the days of cheap and abundant oil (not to mention coal and natural gas) are over.

Unfortunately, the mainstream media and politicians on both sides of the aisle are parroting the hype, claiming — in Obama’s case — that unconventional oil can play a key role in an “all of the above” energy strategy and — in Romney’s — that increased production of tight oil and tar sands can make North America energy independent by the end of his second term.

We need your help: Please share this video and help bring a dose of reality to the energy conversation.

Our civilization runs on oil.

It’s the cheapest, most energy-dense and portable fuel we’ve ever found. Nature required tens of millions of years to make petroleum, and we’ve used up the best of it in less than two hundred.

A little over a decade ago, eminent petroleum geologists calculated that global oil production would soon hit a “peak” and begin to decline, no longer meeting ever-rising demand. But oil industry spokesmen countered with the message, “Don’t worry, there’s plenty of oil!” and assured us that everything would be just fine.

So what actually happened? World crude oil production flat-lined in 2005, and oil prices went crazy. Wars erupted in the oil-rich parts of the world, and the global economy went into a tailspin. The term “Peak Oil” entered the lexicon.

But wait. What’s actually new here? Most of this technology has been around since the 1980s. The unconventional resources have been known to geologists for decades. What’s new is high oil prices.

It’s high oil prices that make unconventional oil worth producing in the first place. It takes lots of money and energy, not to mention water, to frack low-porosity rocks. And the environmental risks are staggering.

So, what’s the bottom line here?

Yes, there’s still oil in the ground. We just can’t afford it. In broad terms, the peak oil analysts were right. But the fossil fuel industry is winning the PR battle.

What really matters, though, is not who wins the debate, but how we prepare for the inevitable. We’ve got to wean ourselves off our high-energy lifestyle.

We’d be foolish to wait for events to settle the debate once and for all. Let’s say goodbye to oil. It’s saying goodbye to us.

WE NEED YOUR HELP SHARING THIS VIDEO